Colosseum is a Player versus Player arena for Vigilantes. Form parties within your Vigilante and challenge others and earn Brave Coins! 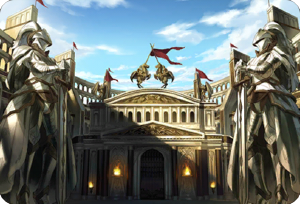 Colosseum is a Vigilante-based faux PvP mode. Group up with your mates and defeat all of those that crosses your paths! Your opponents are decided from within other Vigilantes by a random algorithm based on popular data collected by the developers in the game. Let's try to find the most effective tactics to defeat your opponents.

Fight for Fame points to increase your Vigilante's league grade to earn more rewards. Create groups for Colosseum, analyze the characteristics of other player's jobs and weapons, and fight using tactics.

Brave Coin is a currency used at the Rare Coin Shop to purchase items for Item Awakening. These will unlock your gear's Awakening Effect, as well as raising the overall stats. Lets try to collect as many as possible!

There are two options in the menu: 'Host Group' and 'Join other Members'.

By hosting a group, you can wait for up to 3 other Vigilante members to join, or go whenever. The amount of of opponents is usually equal to your group number and/or power.

You can join other Vigilante hosts and do battle with them.

The battles can be up to 4 people versus 4 people, but you can also enter with less. Your opponents is randomly decided based on power and numbers.

Each wave has a time limit of 5 minutes. You win if by defeating all opponents.

Even if you are unable to fight at the end of the battle, you win if other members survived.

You lose if your group is annihilated or the time limit is up.

You will battle up to 5 waves, with all HP, BP, Buff, Debuff, Cooldowns transferring to the next wave.

The enemy will also be using rows as well. You will not be able to choose your targets. Targets are decided through a special rule below.

Attack priority in Colosseum is decided by weapons. The weapons dictates which row they will target enemy from first.

You cannot escape from Colosseum battles.

Some Buff/Debuffs are adjusted. Damage and Heals are also adjusted.